Praise for Seduced by Mrs. Robinson: 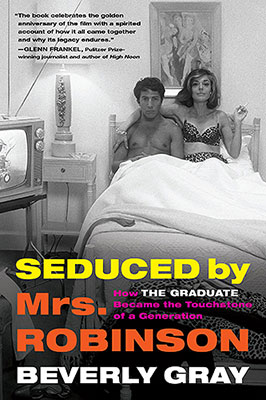 “[Gray] writes smartly and insightfully…The book as a whole offers a fascinating look at how this movie tells a timeless story: that life is always about making choices.”
—Amy Henderson, The Washington Post

“The persuasive power of Seduced by Mrs. Robinson lies not in proffering a singular interpretation of its meaning but rather in the open-ended way it encourages readers to give in to the scope of the film’s meaningfulness. Not only will this book compel readers to go back to The Graduate—it ought to keep them coming back to any future film books by Beverly Gray.”
—PopMatters (read the full review)

“Readers discover how this seemingly unprepossessing movie, adapted from a decidedly not best-selling novella, became one of the top-grossing films of its day, helping to articulate the frantic youth movement that defined 1960s culture and made stars of its actors. Highly recommended for serious cineastes and fans.”
—Library Journal, starred review

“Perhaps the greatest compliment I can bestow on this accomplished and compelling book is to say that Gray will send you rushing to Netflix to watch The Graduate again, and when you do, you will see a familiar movie in an entirely new way.”
—Jewish Journal

“Gray, a film industry veteran and the author of books on directors Ron Howard and Roger Corman, is an especially sharp chronicler of the movie’s social context and influence… Here’s to you, Beverly Gray, for your completely baked appraisal of The Graduate.”
—Shelf Awareness

“Absorbing… Well-researched and skillfully composed… Gray effectively shows how The Graduate worked as a subversive force in a period about to reassess its cinematic and cultural conventions.”
—Kirkus Reviews

“An insightful look at the making of the movie… Prepare to be seduced by Gray’s book.”
—Newsday

“Although Gray offers a thorough and illuminating discourse on the film’s themes, production and legacy, it’s never long-winded or heavy-handed. On the contrary, Seduced by Mrs. Robinson is consistently entertaining, effortlessly engaging, and altogether satisfying as the first and last word on a film that remains, as the subtitle indicates, a touchstone for a generation.”
—Yes! Weekly

“In addition to Gray’s extensive research, including lots of new material from producer Lawrence Turman (and his archives), the author was just finishing college when The Graduate opened so she is in the perfect position to recall the impact the movie had on baby boomers.”
—Connecticut Post

“One begins to see on the page why this film has remained in America’s collective unconscious for half a century.”
—Publishers Weekly

As in her superb biography of Roger Corman, Beverly Gray is a wonderful writer, and her study of The Graduate as a landmark film catches an important moment in pop culture history. Her portrait of novelist Charles Webb is a particularly haunting sub-plot in an entertaining book already abrim with vivid detail.”
—F.X. Feeeney, film critic, author of Orson Welles: Power, Heart and Soul

Here’s Beverly’s guest post for the NF Reads site, discussing her career and what she’s learned about herself as a writer
Read the post
Beverly talks with Robert Siegel of NPR’s All Things Considered

And check out Beverly’s LitHub.org piece, which speculates on the possibility that Benjamin Braddock of “The Graduate” fame might someday follow in the footsteps of his creator, the late Charles Webb, and reject the rules of society altogether. July 2, 2020