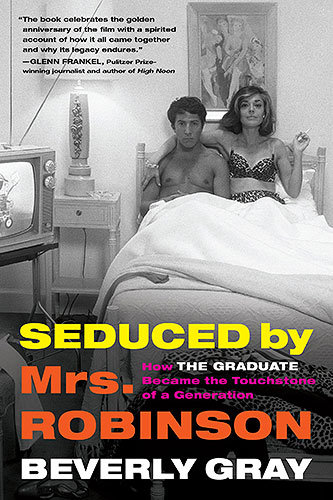 How The Graduate Became the Touchstone of a Generation

“Mrs. Robinson, you’re trying to seduce me. Aren’t you?”

Published to coincide with the 50th anniversary of the landmark film that turned Hollywood and American culture on their heads, the inside story of how it came to be, how it worked its magic, and how it continues to influence us today.

When The Graduate premiered in December, 1967, its filmmakers had only modest expectations for what seemed to be a small, sexy, art house comedy adapted from an obscure first novel by an eccentric 24‑year‑old. There was little indication that this offbeat story—a young man just out of college has an affair with his father’s partner’s wife and then runs off with her daughter—would turn out to be a monster hit, with an extended run in theaters and seven Academy Award nominations.

The film catapulted an unknown actor, Dustin Hoffman, to stardom with a role that is now permanently engraved in our collective memories. While turning the word “plastics” into shorthand for soulless work and a corporate, consumer culture, The Graduate sparked a national debate about what was starting to be called “the generation gap.”

Now, in time for this iconic film’s 50th birthday, author Beverly Gray offers up a smart close reading of the film itself as well as vivid, never-before-revealed details from behind the scenes of the production—including all the drama and decision‑making of the cast and crew. For movie buffs and pop culture fanatics, Seduced by Mrs. Robinson brings to light The Graduate’s huge influence on the future of filmmaking. And it explores how this small movie rocked the late Sixties world, both reflecting and changing the era’s views of sex, work, and marriage.

Thousands of young people like me recognized in The Graduate the essence of what was going on in our own lives. Miraculously, it became our film as much as it was the film of Mike Nichols or Dustin Hoffman. True to the credo that “you see what you want to see,” we took from The Graduate those elements that spoke to our personal experience of growing up in the late Sixties. In that sense, the film functioned as a cinematic Rorschach test. It still does.
—Beverly Gray

“When you cast a movie,” producer Larry Turman told me in 2015, “you’re panning for gold. You look at all the pebbles in your path, and you hope you find your nugget.” By the start of the year 1967, Turman and director Mike Nichols had sifted through a great many pebbles without striking it rich. A small article had just appeared in the New York Times, disclosing that despite a nationwide talent search, the filmmakers casting The Graduate were coming up empty-handed. Mike Nichols was quoted as predicting that the male leading role “will make a star of the actor who is chosen.” But the right young man had yet to be found.

The article was picked up in newspapers across the country, and soon the film’s Lynn Stalmaster—a casting director whose career went back to TV’s classic Gunsmoke series (1955–1964)—was inundated with mail from would-be thespians dreaming of Hollywood success. Mothers endorsed their sons for the role of Benjamin Braddock; young men sent in their graduation photos and offered lengthy character analyses of the part they hoped to win. In all, over three hundred amateurs personally contacted Stalmaster, detailing their acting credentials and their conviction that “Benjamin Braddock, c’est moi.” Some were cocky: “I expect it’s only a matter of time before I work with you because basically I am a star.” Some were modest: “Previous acting experience—none, however my quality of personality is above average.” Some were openly crass: “I mean, what’s wrong with being rich and famous?” Some were downright pathetic: one neatly handwritten note explained that “if you truly do not want a ‘Hollywood image’ of a college boy, you may be interested to know I am slightly overweight and also wear (when the occasion calls for it) a hearing aid.”

“Beverly Gray’s book celebrates the golden anniversary with a spirited and well-researched account of how it all came together and why its legacy endures.”
—Glenn Frankel, Pulitzer Prize-winning journalist and author of The Searchers: The Making of an American Legend

“Beverly Gray’s fascinating and kaleidoscopic portrait makes a compelling case for The Graduate as the eternally appealing ‘youth’ movie.”
—Molly Haskell, film critic and author of From Reverence to Rape: The Treatment of Women in the Movies

“Seduced by Mrs. Robinson is a fun and fast-paced behind-the-scenes account of the making of one of the most influential and beloved films in Hollywood history.”
—Debby Applegate, Pulitzer Prize-winning author of The Most Famous Man in America: The Biography of Henry Ward Beecher

“Beverly Gray has written an often hilarious, always smart, sassy, and incisive story about The Graduate. Her research is impeccable, and her insights are keen.”
—Jeanine Basinger, founder, Film Studies Department, Wesleyan University, and author of I Do and I Don’t: A History of Marriage in the Movies

“With passion, verve, authority, Beverly Gray details the perfect storm of events that culminated in the generation-defining film. A refresher and a reminder of the film’s cultural impact and a joyous behind-the-scenes look at a pivotal moment in American cinema and why The Graduate still resonates.”
—Brian Jay Jones, author of Jim Henson: The Biography

“…a lively, layered recounting of the genesis, production, release in 1967 and unique cultural significance of this landmark movie. A baby boomer herself, [Gray] brings to the absorbing story the wit and poignance of a SoCal girl, born and bred, and the thorough expertise of a Hollywood insider.”
—Kate Buford, author of Burt Lancaster: An American Life

“Told with an infectious blend of effervescent wit and scholarly substance, Beverly Gray’s deeply personal and critical reappraisal of The Graduate is sure to dazzle diehard fans and, quite likely, to seduce a new generation of impassioned devotees.”
—Noah Isenberg, author of We’ll Always Have Casablanca: The Life, Legend, and Afterlife of Hollywood’s Most Beloved Movie

“[Gray] writes smartly and insightfully…The book as a whole offers a fascinating look at how this movie tells a timeless story: that life is always about making choices.”
—The Washington Post

“Readers discover how this seemingly unprepossessing movie, adapted from a decidedly not best-selling novella, became one of the top-grossing films of its day, helping to articulate the frantic youth movement that defined 1960s culture and made stars of its actors. Highly recommended for serious cineastes and fans.”
—Library Journal, starred review

“An insightful look at the making of the movie… Prepare to be seduced by Gray’s book.”
—Newsday

“Perhaps the greatest compliment I can bestow on this accomplished and compelling book is to say that Gray will send you rushing to Netflix to watch The Graduate again, and when you do, you will see a familiar movie in an entirely new way.”
—Jewish Journal

“One begins to see on the page why this film has remained in America’s collective unconscious for half a century.”
—Publishers Weekly

“As in her superb biography of Roger Corman, Beverly Gray is a wonderful writer, and her study of The Graduate as a landmark film catches an important moment in pop culture history. Her portrait of novelist Charles Webb is a particularly haunting sub-plot in an entertaining book already abrim with vivid detail.”
—F.X. Feeney, film critic, author of Orson Welles: Power, Heart and Soul

Beverly talks with Robert Siegel of NPR’s All Things Considered