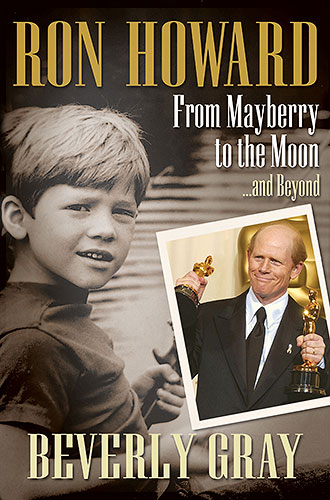 From Mayberry to the Moon…and Beyond

Ron Howard: From Mayberry to the Moon . . . and Beyond ponders just how the impish young redhead from The Andy Griffith Show (and the gangly teenager of Happy Days) grew up to be a major filmmaker. Few show biz kids become adult success stories within the motion picture industry, and it is rarer still to find a former child actor who has made the leap into directing. But Howard, both as the Oscar-winning director of A Beautiful Mind and as the co-founder of Imagine Entertainment, has joined the ranks of the power-players in today’s Hollywood. At the same time, he remains one of Hollywood’s most genuinely beloved figures.

Since the age of twenty-three, when he directed Grand Theft Auto for Roger Corman’s New World Pictures, Ron Howard has worked tirelessly to show the world that he is more than simply an overgrown child star. But one striking aspect of Howard’s adult career is the fact that, although he may be of Hollywood, he no longer lives in Hollywood. In 1985, the year he released Cocoon, he and his wife Cheryl moved their growing family to placid Greenwich, Connecticut. This move has served to insulate him from the pressures of the film industry, and allowed him to keep intact his reputation as a nice guy. His niceness, though, is hardly the whole story: he’s far more complex than he seems.

Author Beverly Gray is an entertainment industry veteran. To write Ron Howard: From Mayberry to the Moon . . . and Beyond, Gray interviewed a long list of teachers, friends, and professional colleagues from all phases of Howard’s life. She has also combed the archives to gain further insight into this very private man who knows all about living in the public eye.

by Mark Lynch, WICN in Central New England | Beverly talks about the career of Ron Howard

The Andy Griffith Show gave Ronny the latitude to come up with tears on his own, but some of his later experiences were quite different. On one movie set a director threatened to beat him if he didn’t cry on cue. (He was not intimated by this heavy-handed approach: “My dad was there, and I figured my dad would punch him out if he tried something.”) In other ways too, the Mayberry experience was unique. From the first, Ronny was treated as a professional with a creative contribution to make. He was free to suggest script changes, though there was no guarantee that his input would be embraced. One day, when he was about seven, he politely objected that a kid his age wouldn’t say a particular line as written. Director Bob Sweeney listened to his variation, and then adopted it for the scene. Instead of simply moving on, Ronny stood beaming, savoring the moment. He proudly announced to his grown-up colleagues, “That’s the first suggestion of mine that you ever took.” Whereupon Griffith deadpanned, “Well, that was the first suggestion that was any damn good. Now let’s go back and do the scene.”

[The TV movie] Skyward was filmed at a small airstrip outside Dallas in 110-degree heat that proved daunting for cast and crew. But both Howards remember the summer of 1980 fondly, because Cheryl became pregnant during the shoot. When their redheaded daughter, Bryce Dallas, was born on March 2, 1981, her middle name was chosen to honor the city of her conception. Among Howard’s old friends at New World Pictures, word circulated that the expectant father, a filmmaker to the core, had videotaped the birth. Meanwhile, newspaper accounts such as the one that appeared in the Los Angeles Herald-Examiner had fun dispelling the rumor that the Fonz had zipped into the delivery room on a motorcycle. People Magazine revealed, in an item entitled “Pappy Days,” that because both Ron Howard and Henry Winkler were now new parents, they spent their get-togethers debating the relative merits of Pampers and Huggies.

“…a breezy and informative examination of Howard’s professional and personal lives, and the sometimes-hazy line that separates them.” (full review)
—CNN.com

“Gray tells Howard’s story straight, without frills. The book is a terrific read with a grand finale.”
—Flint (Michigan) Journal

“Howard’s professional and family life are recounted in exuberant detail in this engaging and informative presentation which is strongly recommended reading for his legions of fans.”
—Midwest Book Review

Cosmo Landesman, critic (The Times of London, 1995):
“Look at the big picture and you’ll see there’s a large gap between his aspirations and his accomplishments. The All-American Boy has grown up to be the Almost Man; the actor who was almost good, the film director who is almost great.”

Walter Mosley, novelist (Devil in a Blue Dress):
“Ron Howard is a perfect example of the quality of American genius. . . . He speaks to the heart and the future of film in America. He speaks to our dreams and dramas.”

Russell Crowe, actor (A Beautiful Mind):
“Ron Howard, it seems to me, has got everybody in the world fooled that he’s some kind of simple bloke. He’s one of the most intense filmmakers I’ve ever worked with.”

Kurt Russell, actor (Backdraft):
“Ronny is a nice person, yes. But maybe it’s just one of the things that’s in his bag of tricks.”

A colleague:
“He is both Opie and as ruthless as he needs to be to get the job done.”

Clint Howard, actor/brother of Ron Howard (How the Grinch Stole Christmas):
“People have seen Ron almost his whole life, growing up. Everybody thinks they know him.”

Shirley Jones, actress (The Music Man):
“He’s the good little boy that does his job, and everything else is private.”