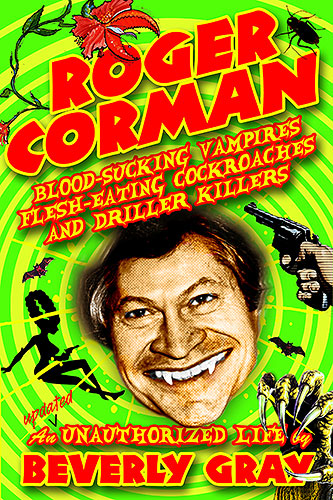 Roger Corman was revered in the 1960s as a director of distinctive horror and science fiction films. He launched the Edgar Allan Poe cycle starring Vincent Price, and gained fame for his offbeat black comedy, Little Shop of Horrors. In later decades, he has served as the hands-on producer of 400 low-budget genre films, shot primarily in his makeshift studio in Venice, California or overseas in Third World nations. Corman’s eye for talent is famous: such celebrated filmmakers as Francis Ford Coppola, Martin Scorsese, Jonathan Demme, Ron Howard, James Cameron, and John Sayles all got their start in what has been called “the Roger Corman Graduate School of Film.”

Roger Corman: Blood-Sucking Vampires, Flesh-Eating Cockroaches, and Driller Killers is far more than a survey of Corman’s career highlights. Rather, it goes behind the scenes to scrutinize a Hollywood legend who was honored with a 2009 special Oscar “for his rich engendering of films and filmmakers.” Writer Beverly Gray has augmented her own experience as a longtime member of Corman’s creative team with in-depth research into the early Corman years. Even more important, she has called on her vast web of contacts to gain first-hand accounts of the Corman world from the 1950s to the present. She has interviewed over one hundred former Cormanites, most of whom have gone on to play significant roles in today’s film industry. All have helped her unravel the central Corman enigma, that of a man torn between the urge to make art and the urge to make money. The contradictions implicit within his personality are at the heart of this book.

Roger Corman and the Academy Awards are not usually mentioned in the same breath. But on April 8, 1975, many of the big winners had a Corman connection. Best Film and Best Director Oscars went to Francis Ford Coppola for The Godfather Part II. Best Supporting Actor was Robert De Niro, for his performance in the same gangster epic. Ellen Burstyn was named Best Actress for Alice Doesn’t Live Here Anymore, directed by Corman alumnus Martin Scorsese. Other nominees that year: Talia Shire and Diane Ladd, both up for Best Supporting Actress; cinematographer John Alonzo, whose very first film was Bloody Mama; and Jack Nicholson, favored to win Best Actor for his starring role in Chinatown. (The award went instead to Art Carney, for Harry and Tonto, leading Corman to joke that Nicholson’s loss had spoiled his personal sweep.) Robert Towne, who won the year’s Best Original Screenplay honors for his Chinatown script, surveyed the glittering multitudes and said, in the presence of reporter Bill Davidson from the New York Times Magazine, “This joint looks like a meeting of the Roger Corman Alumni Association.”

As New World’s attorney, Paul Almond negotiated the purchase of the Hammond Lumber Company’s lot and buildings on Venice’s Main Street [for the construction of a studio]. Almond explained to me that the site, located just three blocks from the Pacific Ocean, fell under the jurisdiction of the California Coastal Commission. This meant he was required to placate a local community group comprised of aging hippies who were deathly afraid of gentrification. After lengthy wrangling, the group issued an ultimatum: that New World pledge not to modernize the buildings’ shabby exteriors, nor to improve their looks in any way. Almond, a savvy negotiator, looked grave, then promised to see what he could do, in exchange for major concessions on other points. As he tells it, “I went back to Roger and said, ‘I can close the deal but there’s one really onerous condition. We can’t modernize the outside of the buildings.’ Roger looked at me, I looked at him, and we just burst into laughter.”

“Beverly Gray nails both sides of the complex Corman, the tame and the wild, the cheap and the generous, the artist and the chiseler.”
—Charles B. Griffith, author of such Corman classics as Bucket of Blood (1959) and Little Shop of Horrors (1960)

“Beverly Gray has done her homework well and we are able to see the very charming Mr. Corman and his palette of different colors. I would say a must read for young producers.”
—Beverly Garland, star of Corman’s It Conquered the World (1956) and Not of This Earth (1957)

“Beverly Gray’s scholarly book on Roger Corman is not only a complete look at the phenomenon of this extraordinary independent film maker, it is an absorbing peek into a unique era in motion picture history.”
—Mel Welles, who created the character of Gravis Mushnik in the original Little Shop of Horrors (1960)

“Gray’s sensitive combination of scholarly detachment and firsthand observation have made Roger come alive in all his wily brilliance.”
—L.A. Weekly

“Kudos to Gray for her exhaustive work on the pop-culture icon who’s given us all years of guilty cinematic pleasure.”
—Total MOVIE

“…it does a better job of suggesting Corman’s tangled motivations than any other biography I’ve read or seen. . . . This half-objective, half-subjective approach yields fascinating insights.” (full review)
—New York Press

“Of the several books I’ve read about Corman, this one felt the truest and left me with the most to ponder.”
—Video Watchdog

Carl Franklin, director (One False Move):
“He’s the best friend that a new filmmaker in this town has.”

John Sayles, writer/director (Lone Star):
“You work for Roger until he can’t afford you anymore.”

Gale Anne Hurd, producer (The Terminator):
“He’s the only person I’ve known in the industry who wanted his protégés to succeed and perhaps have even more impressive credentials than his own.”

Robert King, writer/producer (The Good Wife):
“[Roger Corman is] a Machiavellian businessman, using people to the utmost, knowing they are thriving on the glamour of Hollywood.”

Deborah Brock, producer (Buffalo ’66):
“Just when you think he’s the shit of the world, he turns around and does something of extraordinary niceness.”

Randy Frakes, effects specialist (Battle Beyond the Stars):
“[He’s] the last of the filmmaking moguls who has some intimate knowledge of filmmaking.”

David Carradine, actor (Kill Bill):
“I don’t think you could have the independent film industry that we have now, that’s blooming out there, without Roger’s example of how you can get away with things.”

Thom Mount, producer (Bull Durham):
“In another lifetime, Roger Corman could easily have been Henry Ford. He could easily have been Wilbur Wright. He tinkers, he invents things, he loves invention, he loves improvisation, he loves opportunistic, mechanistic experiment. . . . If you can regard him from a little distance, what you see is a tremendous native American lyricism that’s not very far removed from the great eccentric American entrepreneurs.”

Rodman Flender, director (Conan O’Brien Can’t Stop):
“Maybe we all see what we want to see in Roger.”

A former Corman executive:
“He’s the most conflicted person I know.”